A virtual cooking class on wheels, the RV Cooking Show takes viewers on adventures to some of the most sought-after or interesting but little known RV locales then creates a healthy, easy destination-related RV recipe in host Evanne Schmarder's RV kitchen. Tune in to our RV TV...it's always delicious!

For many industries it is convention season and it turns out Las Vegas is a hot spot this year for many of my working friends. And what’s not to love about “visiting” Vegas for business or pleasure (or maybe even a little of both), huh? Flush with cash or watching your pennies, play your cards right and you can’t lose.

While you might have read that Las Vegas is not the free fun playground it used to be, I disagree. Sure, there are plenty of upscale places to dine, triple-digit show tickets, and spa adventures of a lifetime – and if you can swing it I recommend splurging at least once – but there are just as many low or no cost ways to get a lot of bang for your buck.

Remember, LV is desert – be on the safe side and bring a jacket or sweater. Even if it’s not cold outside (and it does cool considerably in the evenings) the a/c is usually blasting inside. And please, don’t forget the camera!

Whether you’ve driven your RV the distance to check this trip off your bucket list, you love the bright lights, or you’re in town for seminars and Expos get out, stretch your legs, and take in all the glitter and glitz! Here’s a short list of some of my favorite free (or almost free) things to see and do in when I’m RVing in LV:

On the famous Las Vegas Strip:


Off the Strip:
I recently learned that the Liberace Museum will be closing on October 17, 2010 – if you get a chance and have a few extra bucks ($15/person) don’t miss it.

Eatery “Museums”:
Please note this is nowhere near a complete listing of what Las Vegas has to offer. Hop online and explore for more:


Find more information and other fun LV things to do at this useful website: Vegas.com

Regardless of the purpose of your Vegas trip have a ball...it's all there for you to enjoy!

You know it's pledge drive time on PBS went perennial presenter Dr. Daniel Amen is on again with his Change Your Brain, Change Your Body

program (it's a fabulous book, too) ...and I love it! After all this time I don't think I've seen the whole program so I'm usually tickled when I channel surf to it.

The other night I came upon the very beginning and heard him say that a combination of fish oil (about 1K mg/day) and 45 minutes of brisk walking 3 days a week is very effective with weight loss. Either alone is great but put them together and you'll see results in the waistline department.
With the change of seasons and this positive omega-3 news I was reminded of one of my "ah-ha" omega-3 moments. Always interested in learning about having a healthy brain and heart I came across an article in Prevention Magazine

In one part of the article she writes:


It wasn't until Australian researchers showed a clear difference between membranes full of omega-3 fats and ones full of omega-6 fats - a clear metabolic difference - that I explored the seasonal aspects of these two fats. When Tony Hulbert, PhD, at Australia's University of Wollongong, determined that the metabolism of a species--every species on the planet--is a function of the amount of omega-3s in its tissues, I began to connect the dots...

It is no coincidence that hibernating animals...do not go into hibernation when their diet is full of omega-3s, as it is in the spring and summer. Their diet must change to one rich in omega-6 seeds before these animals will slow down for the winter.

It is no coincidence that animals that migrate long distances...fill up on omega-3s for their long journey. These birds know what human athletes are just starting to learn: High omega-3 concentrations in muscle membranes lead to improved performance.

Read it yourself and see what you think. I'd love to hear your thoughts on the topic...leave a comment below.

Disclaimer: This info is simply my humble opinion and I'm not a medical professional. Please consult a doctor before making any decisions about your health, health care, supplements, etc.
Posted by RVCookingShow - Evanne at 4:54 PM 0 comments

Want an irresistible dish to wow your family and friends? Careful...they're addictive! 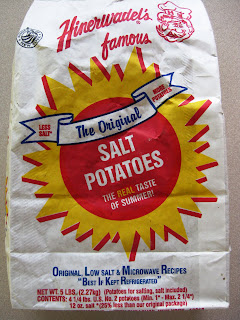 Many moons ago – way before we began our RV adventure – we visited my husband’s childhood friend in central NY and were treated to an easy picnic dish that I have not seen anywhere else – salt potatoes. A wonderful addition to bbq fare, this tasty little side dish is a staple in this part of the country. Almost every grocery store in the area carries a 5 pound paper bag of
Hinerwadel’s Famous Salt Potatoes – small potatoes and a bag of salt.
Why salt potatoes here? Turns out Syracuse, NY was a major salt producer. According to http://www.ilovethefingerlakes.com/:


“Commercial salt production from brine wells began in the Finger Lakes on the shore of Onondaga Lake in Syracuse when it became difficult to obtain salt from abroad during the War of 1812 with England. The refining of salt was Syracuse's largest industry at the time, and it supplied salt to much of the country. The building of the Erie Canal allowed the bulky and low-priced Syracuse salt to be transported to Chicago and beyond relatively quickly and inexpensively by way of the Great Lakes. Although the Erie Canal was known by many names, those in Syracuse called it ‘the ditch that salt built.’”

Many of the workers were Irish and brought potatoes for their meals to be boiled in the salty water from Onondaga Lake – thus the humble beginnings of the salt potatoes we know and love today. The going salt to water ratio is 4 ½ pounds of potatoes to 1 ½ cups of salt but those numbers can be adjusted to your personal taste. If, by chance, you get the water too salty you can rinse some of the potatoes to mitigate the salt.

Salt a large pot of water using the ratio noted above and bring to a boil (you could do this on an outside burner), add the scrubbed potatoes (peels left on please) and boil until cooked but still firm – about 10-12 minutes. Serve with plenty of melted butter. If desired, sprinkle and mix with chopped parsley or rosemary.

Cook the whole batch at once – you’ll save propane and if you have leftovers for the next day all the better.

I enjoy salt potatoes even when I’m not in the central NY area by picking up a pound of small white potatoes and using kosher salt in the water. Try it and don’t be surprised if salt potatoes become a family favorite in your RV!

Visit the RVCookingShow to watch all the episodes, find printer-friendly recipes, learn about cool RV destinations, learn about young fulltime RVers and more.

And we couldn't be more delighted to partner a very select, 'best of' group of organizations dedicated to delivering memorable RV adventures and fantastic food to all the intrepid RV travelers out there.